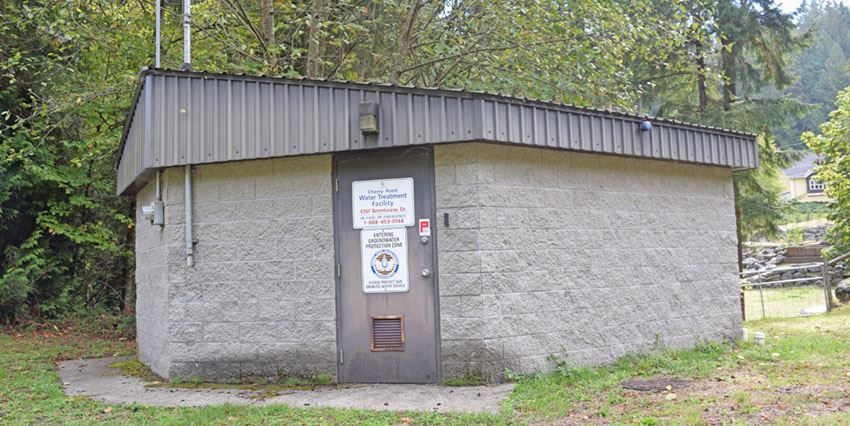 Water from the system is supplied from a groundwater well.  The water requires treatment for the reduction of iron and manganese using a sequestering agent;  the water also receives chlorine disinfection before being pumped up to a 204 m3, steel-bolted, above-ground reservoir. The distribution is gravity-fed from the reservoir on demand from customers.

Critical equipment is monitored 24-hours a day for malfunctions, such as high or low chlorine levels or pump failures; if such an abnormality occurs, an alarm is immediately sent to the on-duty pager to alert CVRD-staff.

Cherry Point water system is sampled, at a minimum, once a week.  The following table shows the sampling frequency and parameters tested for the water system:

Cherry Point is a fully metered water system meaning each connection has a water meter that records water consumption. Water meters are read every six months and customers are charged according to their consumption and based on the rates set out in the inclined block rate table (see below for details). Current year budget information can be viewed here.

High Consumption Due to Undetected Leaks

User charges may be adjusted on a one-time forgiveness basis, where an undetected leak on your property has resulted in water consumption greatly exceeding your normal consumption (for the billing period) and there is no indication that water was knowingly allowed to run to waste. Additionally, a cap of $1500 is in place for subsequent leaks after the first forgiveness of a water overage charge. Written verification describing the nature of the leak and the action taken to repair the problem must be received by the Manager before the forgiveness will be granted.